The ‘back row’ and Welsh Nationalism 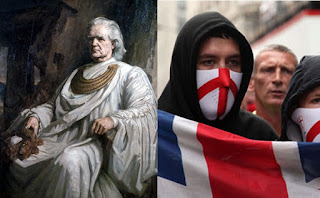 Chris Arnade has been key to my understanding of Trump supporters since the election last year. He sees the country as being divided between what he calls the ‘front row’ (cosmopolitan, coastal USA) and the ‘back row’ (rural, inland USA) and argues that calling the latter ignorant, reckless or irrational is self-defeating, and is likely to harden their resolve rather than weaken it. The ‘front row’ and ‘back row’ are separated thus:

These definitions are perhaps over simplistic, even in their original context in the USA. For instance, a lot of ethnic minorities that find themselves in the ‘back row’ are ardent Democrat supporters.

It’s worth noting however that this isn't just a wealthy/poor divide: We know that a lot of Trump supporters are actually well off, but it’s the world-view rather than how much money they have in the bank that’s important here.

If you’re reading this blog, it’s very likely that you fall into the ‘front row’ category. In fact, I don’t think it would be particularly controversial to argue that Welsh nationalism as a whole has been primarily a ‘front row’ pursuit. If you were asked to picture a Welsh nationalist you would probably see in your mind’s eye an academic such as O.M. Edwards scribbling away at his desk, or the Archdruid crowning a bard. This becomes even clearer if you consider Welsh nationalism’s primary complaints:

On the other hand, British/English nationalism is very much a ‘Back row’ nationalism. It is sneered at by liberal commentators. The primary image of British nationalism is a skinhead English football fan upending a cafe on the continent, or Nigel Farage holding a pint in a pub. Brexit is ‘irrational’ and ‘racist’.

The problem is that this ‘front row/back row’ divide also explains why Brexit and Donald Trump’s campaign were so successful, while Welsh nationalism continues to move forward, in the words of Captain Blackadder, “at the pace of an asthmatic ant carrying some heavy shopping”.

Democracy does not favour the intellectual and rational. It’s all down to numbers. Wales does have small pockets where the ‘front row’ are in the ascendancy (university towns and cities). It is, however, primarily a ‘back row’ country. Over half of the vote is locked up in the post-industrial south-east, the ‘costa geriatrica’ of the north Wales coastline, or in socially conservative rural areas.

The primary question that Welsh nationalism faces, therefore, is how does it make itself relevant to the ‘back row’? Moreover, does it really WANT to make itself relevant to them? Does it have the stomach for it - do the ends justify the means? Can, and does it, want to bring out the inner Trump, the inner Nigel Farage, and appeal to this demographic?

I'm not sure it does.
Cenedlaetholdeb / Nationalism