Why a Welsh national media should be goal #1 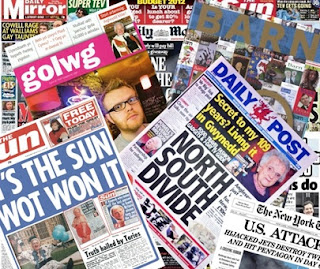 In my last blog post I suggested that the future prospects for Welsh nationalism weren’t as bleak as some suggested. This wasn’t however to suggest that things are perfect as they are.

For instance, Labour will only continue to support further devolution while it serves their own interests to do so. If they were to lose power, and if the Conservatives or UKIP were to form a Welsh government, it’s fair to say that devolution would probably stop dead in its tracks.

Also, it’s clear that Labour will only take devolution so far. They aren’t ever likely to support any kind of split between Wales and the rest of the UK, apart perhaps for a federal solution. We aren’t there yet, but eventually we’re going to hit that buffer.

However, I’d like to use this blog post to concentrate on how devolution could be turbo-charged, starting with the media.

Nationalism needs two things: Firstly, political institutions that want to expand their own power, and use nationalism as a means to do so.  And secondly, a national media which serves as a medium through which that message can reach the masses.

Needless to say that the Welsh people are mostly exposed to a British rather than Welsh discourse of nationalism. Most people read or watch British media that refers to the entirety of the UK as one national community, and make almost no mention of Wales at all.

The only group that are heavily exposed to media that treats Wales as an imagined community in its own right are Welsh speakers (through Newyddion 9, Golwg, Barn, etc.), which is one reason why they represent the bulk of Plaid Cymru’s support.

Institutions play a very important role in shaping the discourse of nationalism, as they have something that is referred to in academic circles as ‘news access’. This is the ability to shape the content of the news.

Journalists are increasingly low on both time and money, and so they tend to depend for their content on institutions that can give them a lot of news without much effort. So they tend to corral around political institutions, like Westminster, the courts, football clubs, and so on.

We saw this at work during Scotland’s Independence Referendum. The BBC wasn’t biased per se, but the fact that most political journalists were based in London, and were used to depending on London’s political institutions for their news content, meant that those institutions had something of an advantage over Scottish political institutions in terms of controlling the news agenda.

Historically, Wales has lacked either, or both, a national media or national institutions.

In the 20th century, Wales neither had a media (conglomeration meant that the media had largely centralised in London) nor very many political institutions. Welsh nationalism was largely driven by a nucleus of intellectuals within the few national institutions set up at the end of the previous century.

Today, Wales has a number of national institutions (although they remain very much weaker than those in London), but still virtually no English-language national media.

BBC Wales is a branch of a much larger British media organisation, and the newspapers and news websites are largely regional (Western Mail/Wales Online for the south, Daily Post for the north, and a smattering of Cambrian Newses and Cwmsgwt Journals in between). The regional north/south divide in the media accentuates the impression that north and south Wales are two separate imagined communities.

The lack of a national media is a big problem for Welsh nationalists. It means that they lack a medium through which the masses can come into contact with the discourse of Welsh nationalism.

It means that come every election, institutions that support an unionist perspective have the ‘news access’, while Plaid Cymru struggle to get their message out there at all.

Welsh nationalist could turn to social media. This proved very effective in Scotland. However, there’s always a danger that social media becomes an echo chamber. You get the impression of being part of a mass national movement, while actually speaking to a small number of hard-core activists (see Trump or Corbyn for more details). But it’s better than nothing.

Setting up a TV station or a newspaper is a very expensive business, of course. Wales lacks a national media for two reasons: first, a small population. Secondly, a poor population. It’s advertising rather than circulation that drives the media’s profits, so the second is the bigger issue.

If it is to stand any chance of success, finding a way around this problem needs to be goal #1 for the Welsh national movement. It’s more important than winning power at the Welsh Assembly – in fact it’s probably a prerequisite to winning power.

Even if it didn’t explicitly support Plaid Cymru, a Welsh national media would, by virtue of its very existence, emphasise the existence of a Welsh imagined community.

I was very much pro setting up the Y Byd newspaper in 2008. However, the Welsh-language is by now rather well served by media, with Newyddion 9, Golwg 360 and Cymru Fyw offering what is in effect a daily news service.

The need now is for an English-language national newspaper/TV news station/website. How we do that is the main conversation we need to be having.

Without an effective means to communicate the discourse of nationalism to the masses, Welsh nationalism won’t get off the starting blocks, while British nationalism will continue to reinforce an imagined community in which Wales is best run from Westminster.
Cenedlaetholdeb / Nationalism Cyfryngau Cymru / Welsh Media

It’s difficult to think of a more emotive issue in Wales’ local government than one that combines the Welsh language on one side and parents’ gut feeling about what is best for their child on the other.
This is a powder keg waiting to explode, feelings are high on both sides of the argument, and there’s a real danger someone will say something silly and set the whole thing off – oh, too late.
To make things worse, Neil Hamilton has now involved himself in the debate. UKIP feed off division, and will stir up hate for votes. It’s like asking a divorce lawyer to be your marriage councillor.
So what is needed on both sides are cool heads, and a grown up discussion on the facts of the matter. The central question here is: What is best for the kids?

The benefits of bilingualism
Why is the Welsh language taught at schools? There are cultural and historical reasons, of course, but those are unlikely to sway parents who don’t feel part on that tradition.
At its most basic level, then, the abil…

There is something a little bit manufactured about the row over the Gorsedd of the Bard’s refusal to honour the Welsh football team.
Has anyone asked Gareth Bale and Co if they actually want to be druids? I’m a member of the Gorsedd, and being included was the greatest honour of my life. But it’s certainly not for everyone.
Although the yearly inductions are presented in the media as a kind of national reward for service, on par with the New Year’s honours, the Gorsedd is actually a community of Welsh-speakers.
This is because the primary aim of the Gorsedd is to promote the Welsh language and culture. It mostly rewards bards, novelists and singers.
The Welsh FA have done a cracking job of promoting the Welsh language. But I don’t expect inclusion in the Wales match-day squad just because I can speak Welsh. That's not the criteria.
The problem here is that the National Eisteddfod is frequently caught up in the inevitable conflict between Welsh identity and a language that 20% of …

My new year’s resolution for 2017 was to do things rather than talk (or tweet) about doing them.
As a first step towards that goal on the 1st of January I bought the domain name Nation.Cymru with the intention of setting up a community-driven national news website.
This sounds very grand, but it all depends on you. I'm not going to be able to do anything without your help.
We’re all aware of the problems currently facing the commercial Welsh media. With a small and comparatively poor population (within an UK context), the Welsh media market simply can’t compete with the London press, a problem further exacerbated by the decline of print sales.
In order to close the ‘democratic deficit’ that exists in Wales, we need to create a Welsh public sphere. Such a national public sphere exists on the pages of the Welsh-language press, in magazines such as Barn, Golwg, O’r Pedwar Gwynt, and websites such as Golwg 360.
There is a danger however that these publications are largely preaching …

Why Labour and Plaid Cymru should support a Welsh independence movement

In two or three years, we could be looking at a very different United Kingdom, if it exists at all.
Scotland could be an independent country and Ireland a united one. Corbyn will have led Labour to a cataclysmic defeat, reducing the party to an ineffectual rump of some 150 seats.
Wales will become an economic backwater as Brexit wipes out much of the manufacturing and agricultural industries. The economy will be even more centralised in the South East of England.
This is the bleak future that we face here in Wales. However, both Labour and Plaid Cymru, the small and capital ‘N’ nationalist parties in Wales, have been very slow to adapt to these changes.
If you look at the issues being debated in the Welsh Assembly, it’s as if nothing has changed at all.
Labour and Plaid Cymru’s paralysis is best understood when you realise that nationalism is ultimately driven by self-interest.
Labour’s rugby-nationalism
Labour supported the creation of the National Assembly because they knew that the…