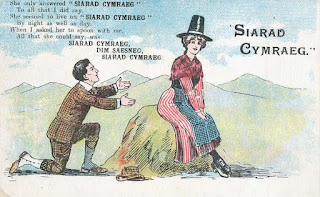 I’m going to blog in English, for once, because I’d like to see what non-Welsh speakers have to say about this matter.

About two weeks ago I witnessed a fiery exchange on Twitter, concerning the Welsh language. To cut a number of short tweets even shorter, here’s the gist: a tweeter tweets a tweet ridiculing S4C, saying something along the lines of ‘What’s the point of S4C if only three people can speak the language?’ (the original message seems to have been lost in the mists of the time). The message was re-tweeted by a Welshman, and the response was instantaneous. The Welsh language tweeters descended on the poor woman like a pack of ravenous wolves, or a shiver of sharks with the taste of blood in their nostrils. She was ripped limb from limb. One or two Welsh tweeters tried to correct her, but most just called her stupid, or worse.

About an hour later this tweeter returned and was understandably surprised at the ‘hate mail’ filling her page. She probably hadn’t put more than two seconds of thought into the tweet itself and wouldn’t even have expected a solitary reply. Anyway, she was never going to apologize after being called an idiot, and she finished with a message saying she wouldn’t be going on holiday to Wales again because all the people were so rude.

Of course, I accept that some blame must rest with the girl for saying such an ignorant thing in the first place. But to be fair, we all spout ill-thought-out nonsense on Twitter, all the time.

One feature that is characteristic of communicating on-line, be it through e-mail, twitter or some other medium, is how little thought goes into the messages. Older forms of communication required us to put some time and effort into getting our point across. As publishing has become faster and easier we’ve become far more careless with what we publish. There’s probably dozens of spelling and grammatical mistakes in this blog, which would have been rectified if I wanted to publish it in a book or (to a lesser extent) a magazine. On Twitter publishing is faster and easier than ever before. The messages are extremely short, so they can be as ambiguous as any haiku. No effort is expended on tone and nuance. The consequence is that a message that was intended to be inoffensive manages to offend someone on the other side of the interweb who interprets in a completely different way to what the author intended.

(I always find this to be a problem with e-mail, where a message that was intended to be short and to the point is often interpreted as being a sign of anger or impatience. Always use a telephone when you can!)

Anyway, the message in question wasn’t very ambiguous. It was obvious she didn’t believe many people speak Welsh (only three, in fact, a holy trinity perhaps). But on Twitter people tend to write down anything that flits into their minds, as if we’re reading a ticket tape of their thoughts. There was obviously no intention here to offend. She didn’t go out of her way to publish this attack in a newspaper. It was just pure, undiluted, ignorance about the Welsh language.

And as Welsh speakers we know a lot of people think that no one speaks Welsh. So why should we react with rage when someone expresses this commonly held view? Do we think that attack is the best form of defence, and that the only way we can change such perceptions is to brow beat anyone who disagrees with us?

We must remember that we, as the lucky Welsh speakers, know a lot more about it that most people do. If our parents or grand-parents had decided that the language wasn’t worth passing on, it could well be us on Twitter, saying rude things about S4C.

(Of course a lot of Welsh speakers do say terribly rude things about S4C, but that’s another matter.)

So, let us think before we attack. I’m not saying anti-Welsh comments should not be responded to forthwith. But they should be responded to with measured language, and with facts, and well thought out arguments. Rather than just calling them idiots.

It’s difficult to think of a more emotive issue in Wales’ local government than one that combines the Welsh language on one side and parents’ gut feeling about what is best for their child on the other.
This is a powder keg waiting to explode, feelings are high on both sides of the argument, and there’s a real danger someone will say something silly and set the whole thing off – oh, too late.
To make things worse, Neil Hamilton has now involved himself in the debate. UKIP feed off division, and will stir up hate for votes. It’s like asking a divorce lawyer to be your marriage councillor.
So what is needed on both sides are cool heads, and a grown up discussion on the facts of the matter. The central question here is: What is best for the kids?

The benefits of bilingualism
Why is the Welsh language taught at schools? There are cultural and historical reasons, of course, but those are unlikely to sway parents who don’t feel part on that tradition.
At its most basic level, then, the abil…

There is something a little bit manufactured about the row over the Gorsedd of the Bard’s refusal to honour the Welsh football team.
Has anyone asked Gareth Bale and Co if they actually want to be druids? I’m a member of the Gorsedd, and being included was the greatest honour of my life. But it’s certainly not for everyone.
Although the yearly inductions are presented in the media as a kind of national reward for service, on par with the New Year’s honours, the Gorsedd is actually a community of Welsh-speakers.
This is because the primary aim of the Gorsedd is to promote the Welsh language and culture. It mostly rewards bards, novelists and singers.
The Welsh FA have done a cracking job of promoting the Welsh language. But I don’t expect inclusion in the Wales match-day squad just because I can speak Welsh. That's not the criteria.
The problem here is that the National Eisteddfod is frequently caught up in the inevitable conflict between Welsh identity and a language that 20% of …

My new year’s resolution for 2017 was to do things rather than talk (or tweet) about doing them.
As a first step towards that goal on the 1st of January I bought the domain name Nation.Cymru with the intention of setting up a community-driven national news website.
This sounds very grand, but it all depends on you. I'm not going to be able to do anything without your help.
We’re all aware of the problems currently facing the commercial Welsh media. With a small and comparatively poor population (within an UK context), the Welsh media market simply can’t compete with the London press, a problem further exacerbated by the decline of print sales.
In order to close the ‘democratic deficit’ that exists in Wales, we need to create a Welsh public sphere. Such a national public sphere exists on the pages of the Welsh-language press, in magazines such as Barn, Golwg, O’r Pedwar Gwynt, and websites such as Golwg 360.
There is a danger however that these publications are largely preaching …

Why Labour and Plaid Cymru should support a Welsh independence movement

In two or three years, we could be looking at a very different United Kingdom, if it exists at all.
Scotland could be an independent country and Ireland a united one. Corbyn will have led Labour to a cataclysmic defeat, reducing the party to an ineffectual rump of some 150 seats.
Wales will become an economic backwater as Brexit wipes out much of the manufacturing and agricultural industries. The economy will be even more centralised in the South East of England.
This is the bleak future that we face here in Wales. However, both Labour and Plaid Cymru, the small and capital ‘N’ nationalist parties in Wales, have been very slow to adapt to these changes.
If you look at the issues being debated in the Welsh Assembly, it’s as if nothing has changed at all.
Labour and Plaid Cymru’s paralysis is best understood when you realise that nationalism is ultimately driven by self-interest.
Labour’s rugby-nationalism
Labour supported the creation of the National Assembly because they knew that the…