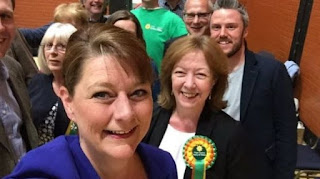 Whether she decides to do so or not, this is particularly noteworthy as a Westminster-bound Leanne Wood could no longer continue as leader of the party. If nothing else, it’s an admission that she may not be planning to hold on to the leadership for very long, come what may.

Thinking tactically, I’m not particularly keen on this idea, for several reasons. Firstly, because it sends the public a message that being an MP is a step up from being an AM. This is no doubt the case for many Unionist politicians, who have gladly moved from the Welsh Assembly to the ‘big league’ at Westminster when the opportunity has arisen. But Plaid Cymru have always emphasised that Wales’ own Senedd is the place to be.

I’m willing to be convinced otherwise. But from where I stand, Leanne Wood running for office in the Rhondda has a few positives, but many potential negatives. If she does lose, her political reputation will be damaged. It would also be difficult to see her continuing as Plaid Cymru leader after failed attempt to extract herself from that position.

If she wins, Plaid Cymru face a very difficult by-election is a Labour heartland. Leanne Wood, with her recognisability and star quality, may have won the Assembly seat relatively comfortably, but that is no guarantee that a generic Plaid candidate would do so, especially post-EU referendum. And the people of the Rhondda may not appreciate having to trudge out and vote for the fifth time since 2015. If Leannne Wood wins the Rhondda at Westminster but Plaid lose it as the Assembly, it would be one step forward, two steps back.

If Plaid Cymru are going to imitate the SNP and become the dominant force in Wales, it’s always going to happen at the Assembly before it happens in Westminster. They always do much better in Assembly elections, because the media focus is on issues related to Wales, and Plaid Cymru’s turnout remains relatively consistent while the unionist parties’ turnouts fall. When they do win power at the Assembly, they will receive the kind of media attention that will make them a more viable prospect at Westminster elections.

Now, however, Plaid Cymru need their best politicians fighting in the Assembly elections. Having a politician of Leanne Wood’s calibre and likeability in Westminster would not help meet that goal, in my opinion.